The Triangularity of Practice-as-Research (PAR) 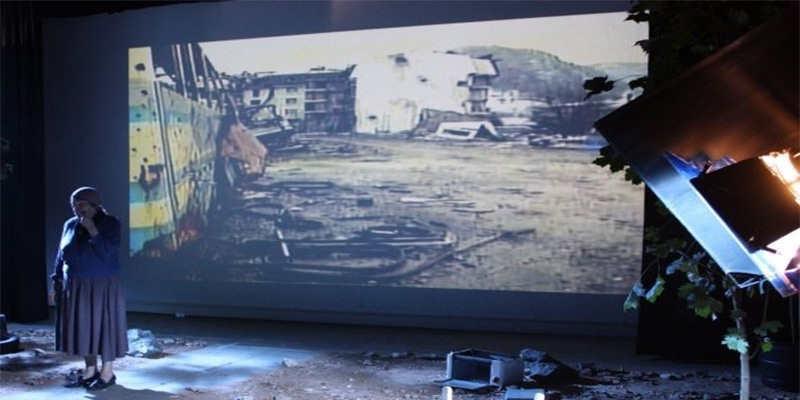 The Triangularity of Practice-as-Research (PAR)

As a practice-based researcher one often suffers from some sort of identity crisis. It is near to impossible to describe what one does without prompting additional questions or misunderstanding. More times than I care to count have I seen people’s eyes glaze over in confusion when I tell them I am a practice-based researcher in film. ‘What does that mean?’, I am usually asked. Giving in to simplicity my response tends to be, ‘Well, I make films and then I write about them’. Inevitably, the next question I get is accompanied by less of a glazed expression than a sceptical one: ‘And you can live off that?’

Recently, I have taken to calling myself either an academic, lecturer or filmmaker, depending on the environment I am in. However, this should not have to be the case – especially not given the fact that this form of research is widely accepted in the natural sciences and has been around in the arts and humanities since the 1970s. Yet, the world still does not seem to accept the value practice has for the production of knowledge within the humanities – both in terms of research and pedagogy. A scientist does experiments through, say, a microscope and then reflects on his/her findings in a research paper or the like. Why is that less problematic than looking at the world through a lens and reflecting on what one sees?

Consequently, I have found the most difficult dimension of being a practice-based researcher to be the fact that one is constantly required to straddle two worlds, neither of which seems to readily welcome one with open arms. There is little to no information about how to approach such research, nor does one receive any guidance or support in order to survive in the industry as well. Ultimately, one has to adopt a split personality, while trying to combat the various prejudices of both worlds. One has to maintain and demonstrate a rigorous drive for academic enquiry, while also illustrating an ability to work in a commercial industry motivated by entertainment and revenue. In many ways, one is neither here nor there in that one is either regarded as ‘not academic enough’ or ‘too academic’.

It therefore does not come as a surprise that this practical methodology is still very much debated within arts and humanities – particularly in relation to how one is supposed to define it and what value it has for the production of knowledge. Although I have been very lucky to be educated at an institution that welcomes PAR, notably The University of Reading (UK), it truly isn’t as common as one might hope. Other institutions either often opt to cancel their practice-based courses or they do not support practice to begin with. Since returning to Vienna, for example, I’ve been surprised just how little this form of research is accepted in any shape. In continental Europe, and specifically the German  speaking countries, research films are still not regarded as legitimate publications and cannot be counted as such. In Austria for example one also has to think strongly about doing what is called a Habilschrift in order to be seriously considered for full-time employment at a higher education research institution. This basically entails writing a monograph on top of one’s PhD as proof of one’s ability to do research independently (i.e. without the type of supervision offered to a PhD student). However, such a piece of research is only accepted or deemed as legitimate research if it is theoretical in nature. What the German speaking world does not seem to take into account is that practical work does not automatically exclude theory – quite the contrary. Additionally, practitioners constantly struggle to find avenues for publishing their work. Several publishers for example have told me that they would welcome my research if I could adapt it to a more traditional form of enquiry that considers the work of other filmmakers. Basing research on my own practice seems to be deemed undesirable.

It is probably quite obvious what my perspective on PAR projects is. In the rest of this post however, I would like to begin a discussion on why I think PAR is essential for the development of an ethically motivated mass medium such as film that can be driven by both purpose and profit. I was notably asked recently to formulate my own view on PAR from the perspective of a practitioner also teaching film direction. Essentially, I believe it is quite impossible to divorce the function of a good practice-based researcher with that of a film/video director. Neither can one separate these two roles from that of a practically-led lecturer. Research, filmmaking and teaching in my opinion are the three core characteristics of a practice-based researcher. This would entail that if these characteristics are taken seriously by both the industry and academia, film as a medium will not only be invigorated with new approaches and extraordinary creativity, but it would also have a positive impact on the way in which we view films. A change in the way we view films could have significant value for development on several levels. In other words, a shift in the way we approach filmmaking, could lead to a shift in the way we consume films – which in turn would elevate the medium to a platform of social, educational, political, economic and ethical significance. Take the following image as an illustration of what I mean: 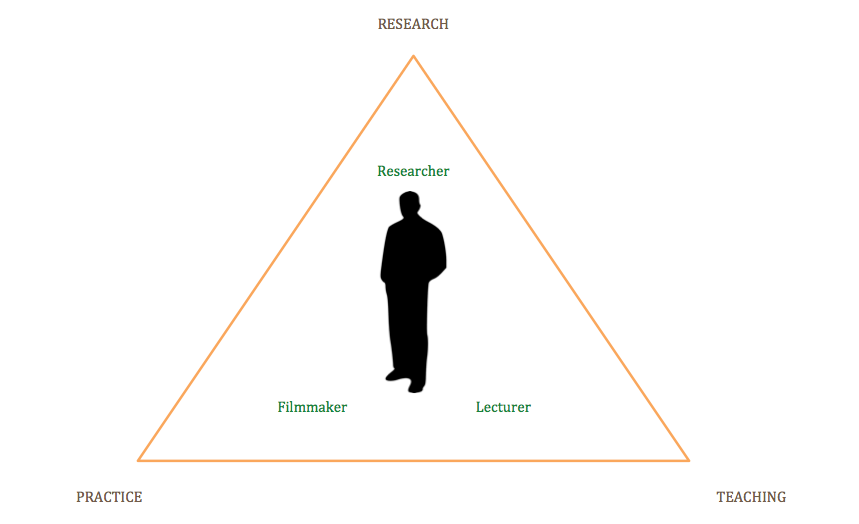 As you can see from the image above, research, practice and teaching stand in a triangular relationship with one another. It is this intrinsic relationship that makes film such a special medium to work in. PAR means practical research, which is why the top corner of the structure symbolises the ‘act of doing research’. As an action, research needs practical processes to find tangible results. As such, it cannot exist in isolation and necessarily has to connect down to the basis of the triangle – which is made up of two additional corners. The fact that practice and teaching are connected to research at the top suggests that they are fed or ‘energised’ by research. Research conversely depends on a strong practical and pedagogical basis in order to be legitimate and sound. Consequently, there exists a crucial exchange between the three corners of the triangle:

Furthermore, as an established researcher or practitioner,

So, a constant reciprocal connection and interaction between the three sides of the triangle exists. Such an exchange therefore feeds both into one’s own practice as well as into the intellectual contributions one makes to the discipline. Crucially however, one has to be open and conscious of these various interchanges for it to have any concrete value.

Finally, this connection in the sketch above … this exchange … is absorbed by a central figure that incorporates and translates all three dimensions into various outputs that has creative, research, pedagogical and commercial value. This figure is the research-driven film director.

Currently, this undeniable interchange is not readily acknowledged by many industry professionals or academics, which unfortunately does not allow the medium to be used as progressively as I believe it is able to. If we could change this however, I can see a future that would place film at the forefront of Arts and Humanities subjects. It would have undeniable impact as a form that produces tangible creative products with commercial value, while also producing knowledge that can catapult our social, historical, ethical and philosophical awareness to new unexplored heights.